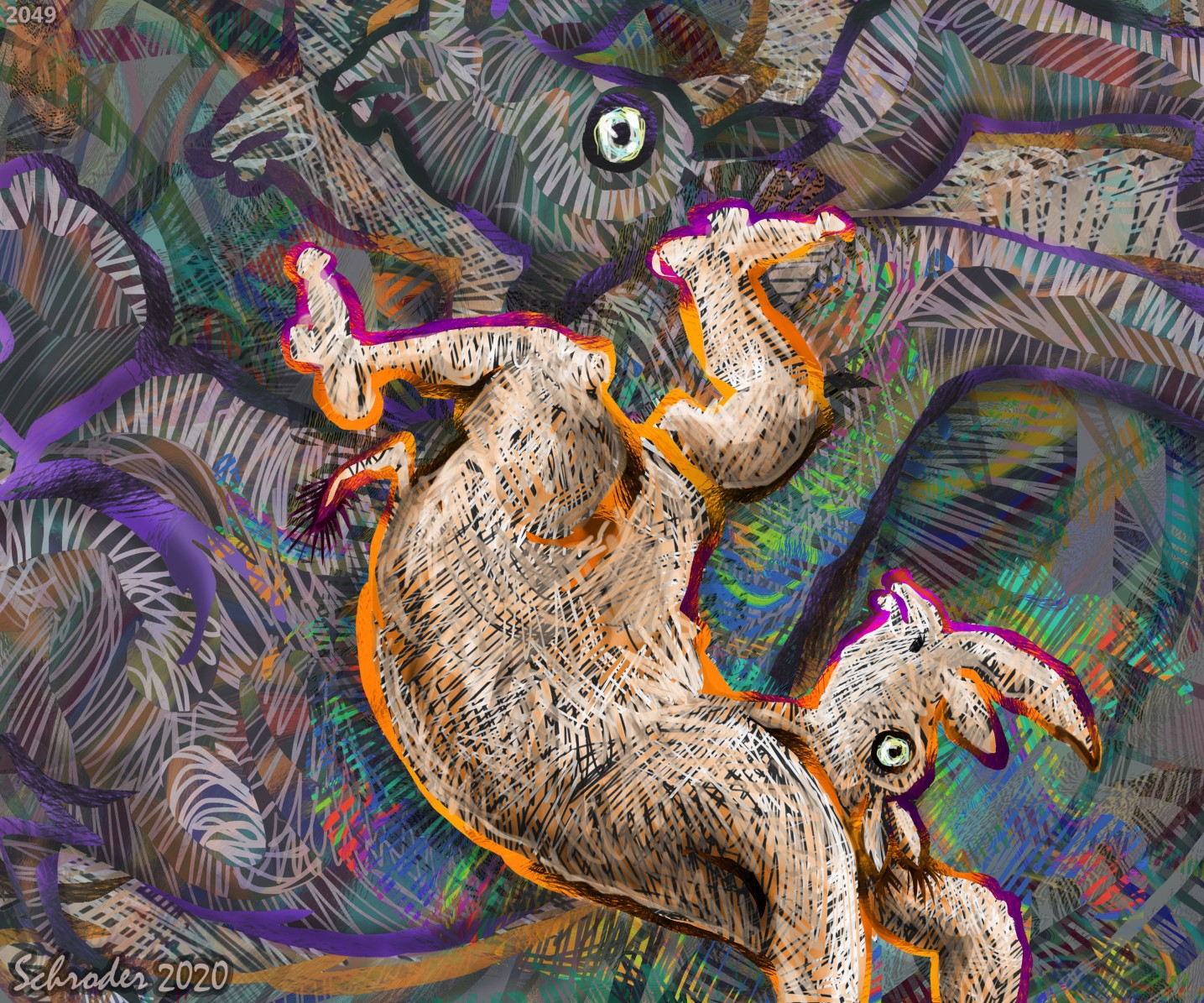 Rhinos sleep, doze, daydream, and space out, in rough rotation night and day. We wink and We’re there. We snort and We’re back. A finely tuned system.

We are not house-proud critters, not having houses, but We occasionally wonder who housekeeps in Dreamland? It’s usually shipshape when We drop in.

Rhinos ask because We often leave Dreamland in a Shambles. Who does the clean-up?

If YIR doesn’t pose the tough questions, who’s going to do it? 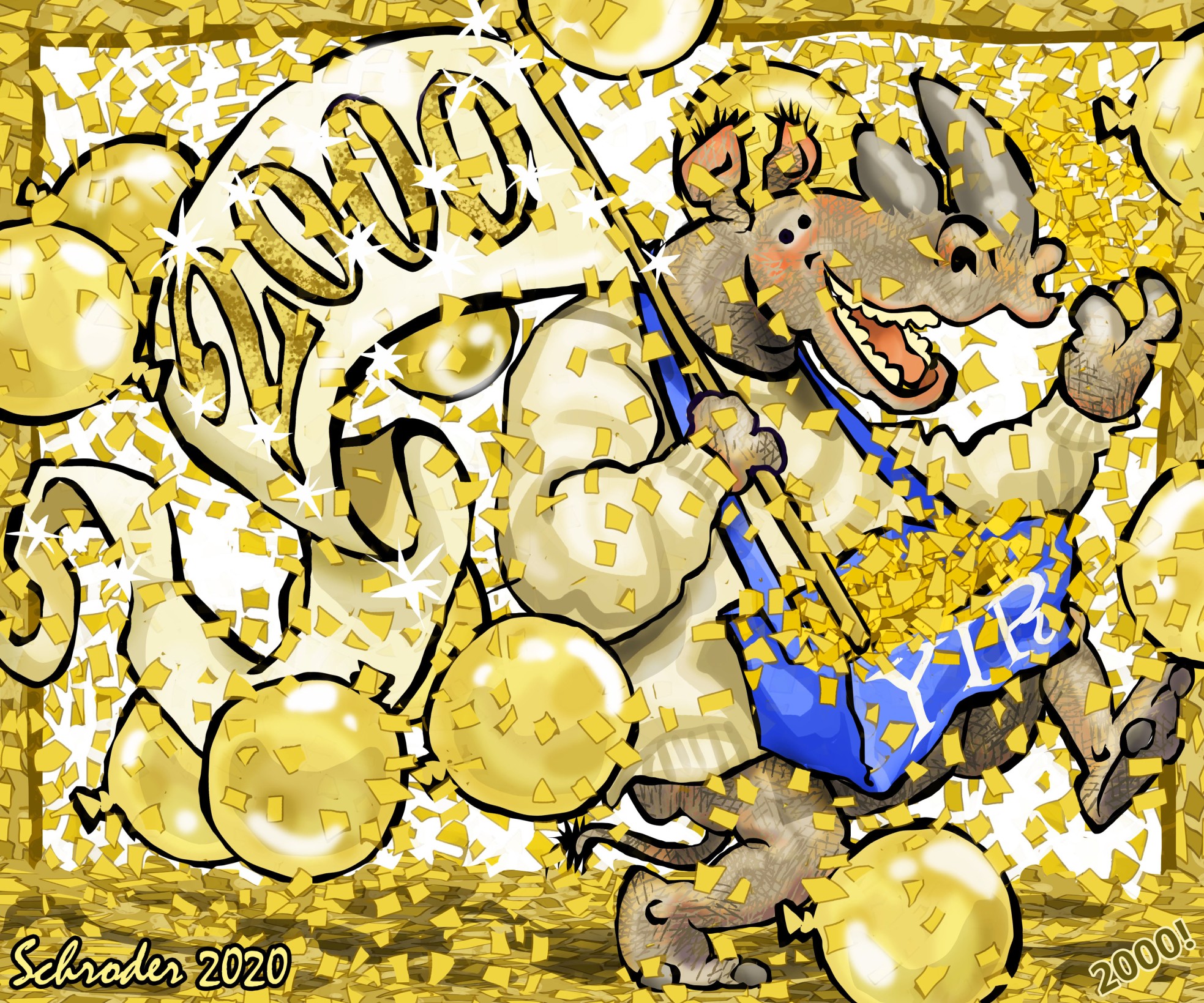 Since October 20, 2014 We have achieved over 100% delivery, even given some vacations and the occasional lapse.

Of course, there’s no group as stupendous as our Readers, and We thank you for your encouragement. Sincerely. 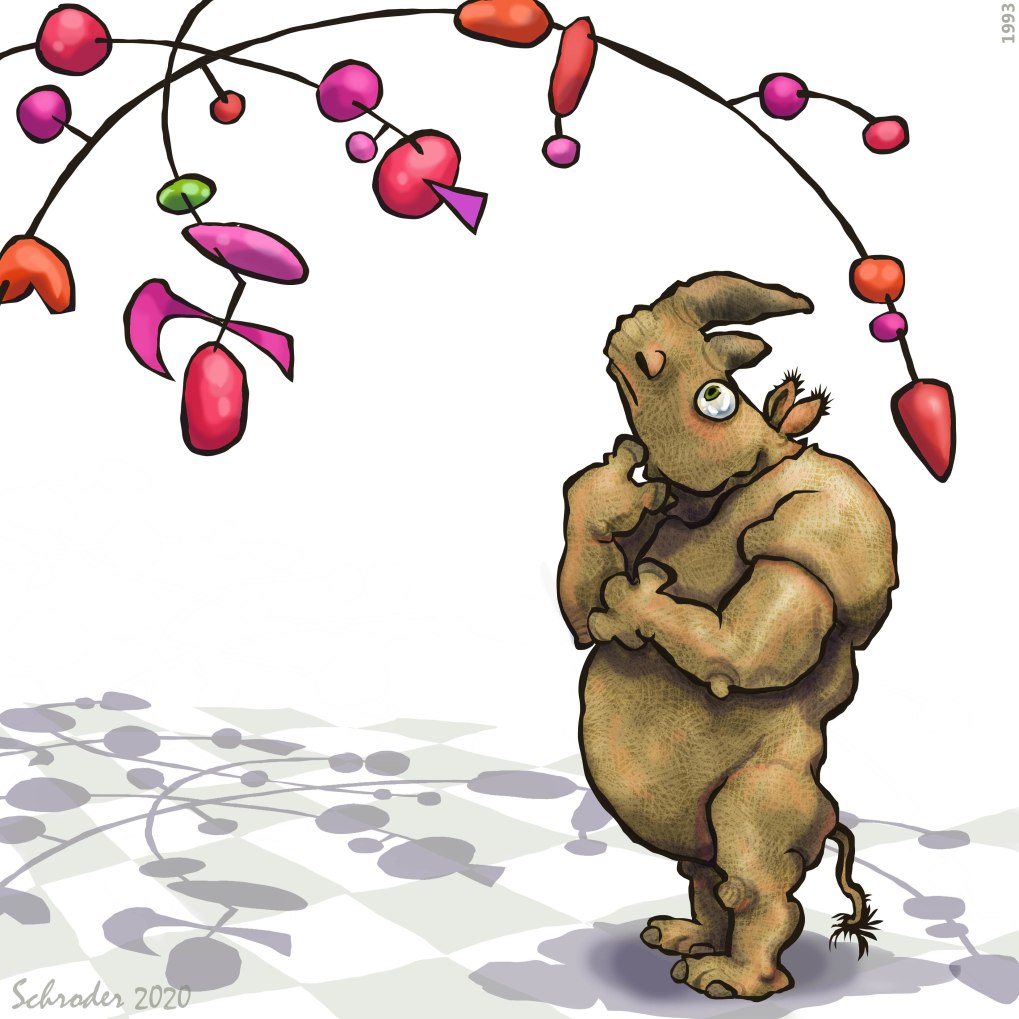 Ah, the old question, the Observer and the Observed, to Be or not to Be, on Wednesdays keep your nose clean, etc.

What We Rhinos find is that the curse of the Gallery is Expectation, the idea that a thing must have meaning, one We are comfortable with. Thus the Gallery Expedition is a confirmation, not a reevaluation or exposition. Comfortable but not Stimulating.

The same curse is potent when dealing with friends, foes, and circumstances. Rhinos Beware.

Sometimes things get out of hand for Rhinos. We are moving forward, smoothly, and then, WHAM!. Not so much.

This is not a new phenomenon; We have dealt with it for millions of years, which is a long time.

We assume it is an exotic genetic dimension, whereby Rhinos cope, but with a lot of extra Tabasco. Surprise!

Note to Self: Whatever. Rhinos are plagued with ideas, impressions, and ramifications, all stimulating our brains and innards. We simply have too much going on, thinking-wise.

The “Note to Self” idea is endearing, but there are problems. Rhinos do not write. We have no place to store a note until We get around to it. We would be unlikely to ever read it, even if We could; We’d forget We’d writ it.

Or We could set aside a Significant Rock, thinking, “When We see that rock, analyze Gravitational Sincerity”. But what would actually happen would be, We’d see the rock and think, “Rock”. And press on.

Oddly enough, many of our Readers seem to think that Rhinos are not musically inclined. True, We have no instruments or sheet music, nor orchestras nor audience.

Still, We have passion and insight and dynamism. And We can hum about as well as anybody.

More importantly, Rhinos know how to conduct ourselves, which is more than many Critters can say.

A brief update on the 50 States- count’em:50!- Project. As We march into the new decade, ‘Your Inner Rhino‘ has 10 states to go. January is very busy, and then 3 more in February. And that, dear Readers, will be that.

Vigilant Readers have pointed out an editorial mistake on Iowa’s state post, which has been addressed. It takes a big critter to admit to error, but We Rhinos qualify, no argument. No offense intended, Nebraska.

While We’re here, We at ‘Your Inner Rhino‘ invite suggestions for future posts. No party politics, no violence, nothing unkind. We speak to our own faults, not other folks’.

On December 20, 1812, Jacob and Wilhelm Grimm first published their “Children’s and Household Stories”. It was successful, and was later expanded to include even more German folk tales.

Rhinos like these stories, even though they defy logic on every level. There is Something Powerful lurking behind the simplicity.

Part of our pleasure in these tales is that We can’t figure out what the Something Powerful is.

Our States of the Union Project has enjoyed Modest Acclamation. So far, We have offered stimulating observations on 37 of the states. Plus informative images.

This effort should be complete by February of next year, with Luck (without which nothing much could ever get done.)

One of the benefits of living in the Wild, as We Rhinos do, is that nobody gets agitated when We act Wild.

Blowing off steam is a Natural process, and nobody’s temperament is improved by unacknowledged stress.

Then it is time for a snack.