Sometimes We Rhinos feel  a bit misguided, whether We’re consciously doing the guiding, or not paying enough attention. Wherever We turn, it’s a big Snarl.

We acknowledge the Temptation to go bonkers, to lose it and throw things.

Or, We can recall what needs doing, and stay on Topic. That sounds more productive to Us. Keep our eyes on the Road.

Logic: it’s a wonderful business when you think of it.

Which We Rhinos do. And in this case, did.

Kublai Kahn’s birthday, 1215 AD, was yesterday. Happy Birthday, Sir. He was a grandson of Genghis Kahn who had unified Mongolia and parts of northern China. After a haphazard power struggle when Genghis died, Kublai eventually became the Grand Khan.

During the turmoil of accession, Kublai conquered the Sung Dynasty, in southern China, a huge, fractured nation. With time, Kublai, who was one shrewd ruler, adapted the Chinese to Mongolian ways, and vice versa. Kublai created a new form for governing, mixing local experts and aristocrats with Mongol forces, to create a more organized environment. Kublai also called his realm the Yuan Dynasty, a nod to the Chinese, who numbered in the millions.

The Yuan came to be the largest contiguous Empire in history. Kublai’s game-changing methods are felt to this day. 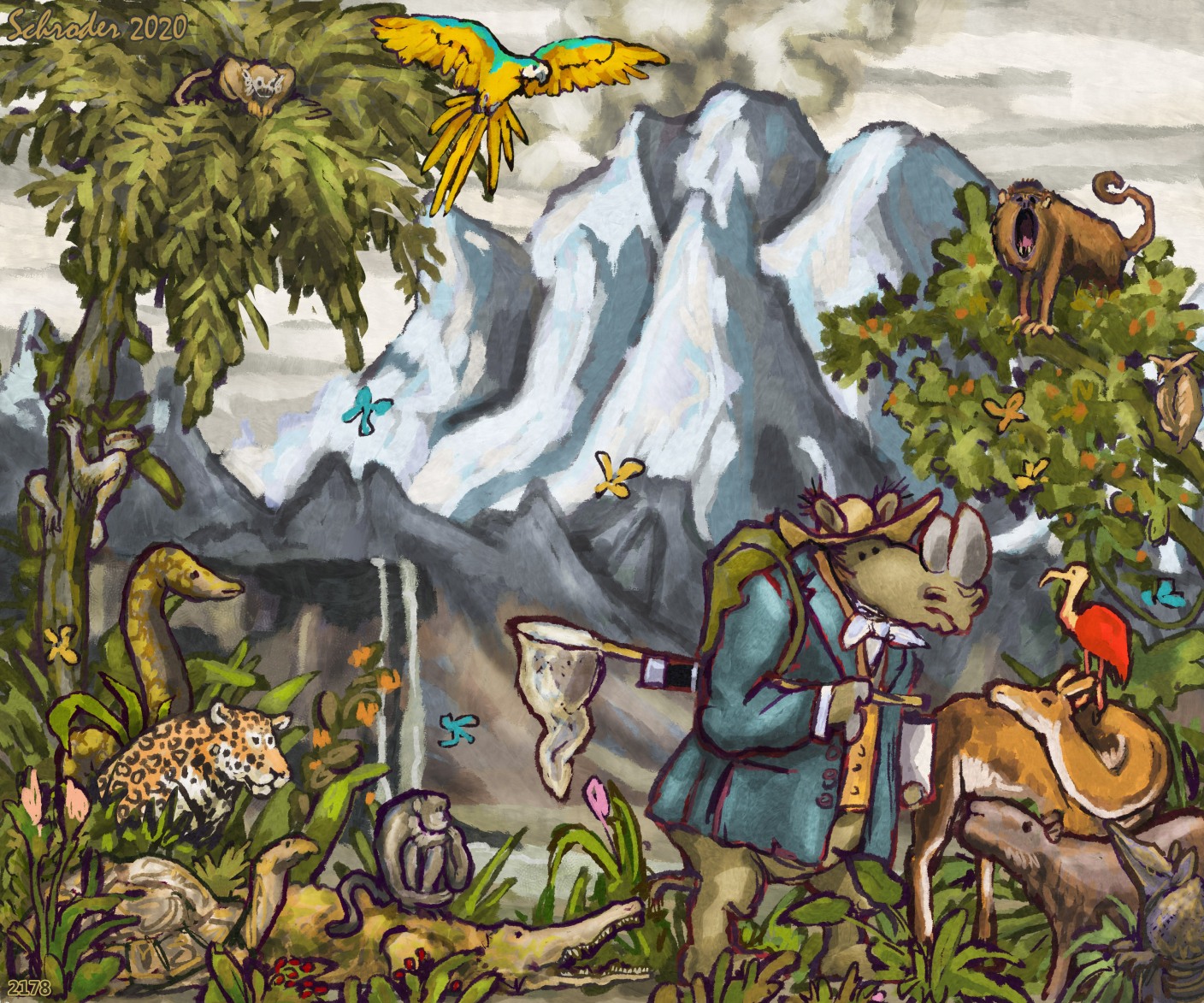 Today We focus our attention on Alexander von Humboldt, a Prussian born in 1769. His accomplishments as a Naturalist are astounding and his influence can’t be calculated. He wrote, he studied, he pondered how the World works. He never specialized in the modern sense, but was interested in all areas of study, paying close attention to the interactions of one area, say botany, on another, say ocean temperatures. He traveled extensively, but not to tour, but to deduce how all the elements form an organic Whole.

The modern perception of Nature is due to his work and writings. He stressed the need of the scientist to go into the field and study. In 1799 he went for 5 years to Latin America; nothing was safe from his interest, particularly, in his case, volcanoes. He became a public figure, speaking, writing, discussing with anybody who knew anything new. He was Interested!

He did not invent Restless Energy, but he was a poster boy for it. In fact, in 1805 he predicted the problems in store for humanity caused by reckless abuse of the Earth.

Wisdom can be encouraged in many ways, each with its own particular spin. 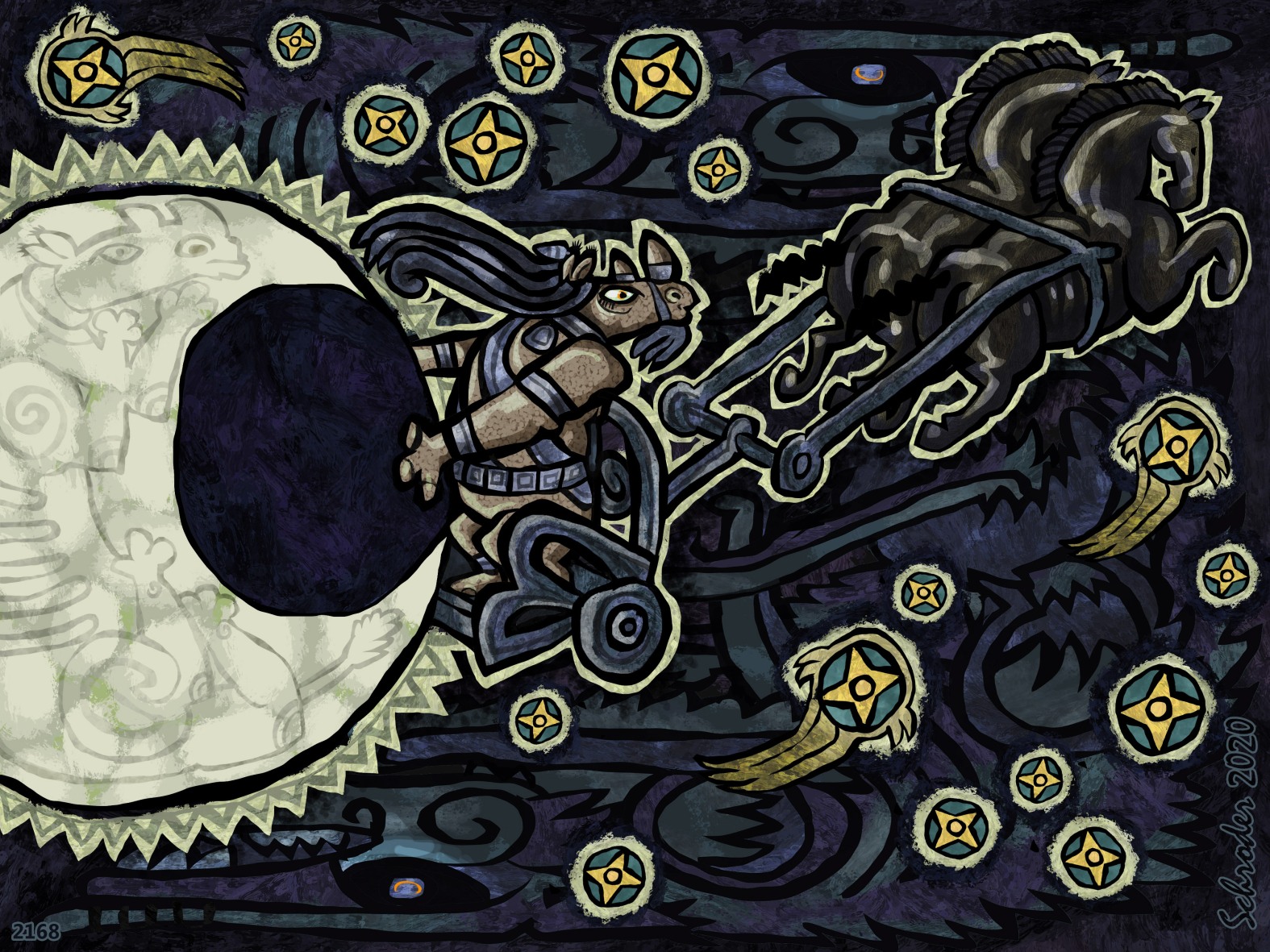 The Norse God of the Moon is named Mani, brother of Sol, Goddess of the Sun. Each of them dash across the sky in a chariot, attempting to evade the Wolves which are nipping at their heels.

The ravenous wolf for Mani is named Hati (meaning ‘hatred’). On the Final Day (Ragnarok), Hati will catch and devour Muni.

Monday is named to honor Mani.

Rhinos don’t pretend to know just what is going on from moment to moment, which is good, since that’s the Truth. Normal is composed of Betwixt and Between.

September is here: a thrill for some, a warning for others. Rhinos are mostly maintaining a wait-and-see attitude (which is nothing new.)

‘Your Inner Rhino’ is fortunate in having a vast store of Philosophic Observations to share with our Readers. We are never quite certain that these pithy epigrams retain their zest in translation, but that is what translation is all about anyway.

There is a lurking Need We Rhinos have for Satisfaction, an all-embracing Answer to Big Mysteries. We can’t put our finger on it, but We feel a responsibility to fumble along, mostly armed only with Good Intentions. And perhaps some Optimism.

We conjecture and surmise, but our efforts are consistently Inconclusive. Probably because We Rhinos don’t know it All.

Which may be a Pity, but it’s also a Fact.

The Most like a Rock is a Rock, obviously. Rhinos find Rocks informative and stimulating. We try to model ourselves on Rocks, but Rhinos vacillate too much; We try one Idea and then another. We wonder about stuff. We are too impatient.

Rocks are entirely into consistency. No opinions or considerations or modifications, just Rockness. 100% Rock.

Rocks are no good for conversation, but Rhinos find them admirable. No apologies, no shilly-shallying. Perhaps Rocks have the right idea? Certainly, Rhinos find ourselves most content when We stop Doing and just Are Rhinos.